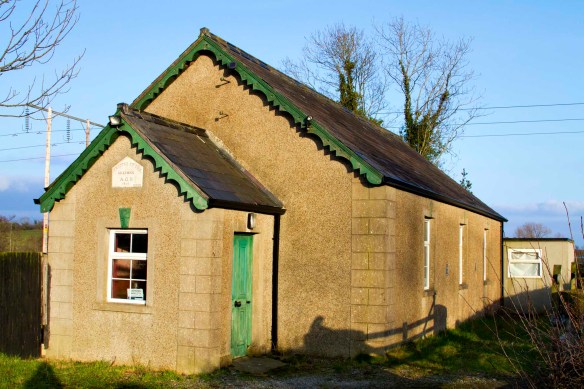 This is Killyman Ancient Order of Hibernian’s Hall or more widely known as “Corr Hall” It was built in 1907 by the local lodge of the AOH and opened by the Irish Parliamentary Party MP for The Falls constituency Joseph Devlin or “Wee Joe” as he was known.  Devlin was president of the Hibs from 1906 until he died in 1934. For many years it was a popular dance and ceili venue in the locality and proved a big hit with American soldiers stationed at the airfield at Ardboe during WWII. It fell in to decline during the late fifties and had been derelict for many years until recently when a local family restored it and now use it for social events including traditional irish music sessions by the local branch of Comhaltas. Despite the name we have no family connection with “Corr Hall” it is in fact a reference to the town-land in which it is situated.