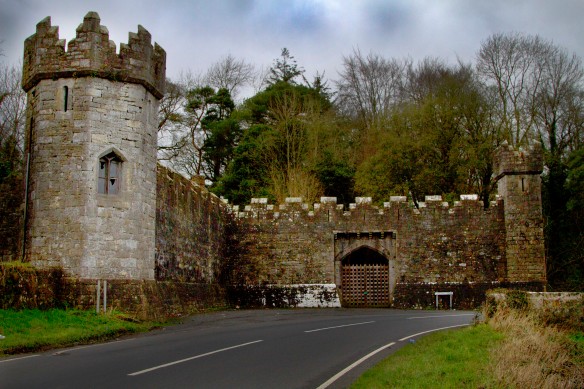 On my way to Monaghan I travel along the Coolkill road from Caledon to Middletown. This is the gate lodge of “Tynan Abbey” on the Coolkill road near to the village of Tynan Co Armagh. Tynan Abbey was a large neo-gothic-romantic country house built circa 1750 (later renovated circa 1815) and situated outside the village of Tynan. The original house on this site was called Fairview and was the home of the Manson family, it was acquired by the Stronges through the marriage of Dr. John Stronge and Elinor Manson.  The castle was surrounded by an extensive estate, once amounting to over 8,000 acres, including park-land and a lake. In 1923, part of the building was occupied by the newly formed Royal Ulster Constabulary rent-free for protection purposes.  During the Second World War, it was again occupied by Scottish, Belgian and American troops. The building was virtually destroyed and two members of the Stronge family killed during an attack by republicans in 1981. It was totally demolished in 1998.