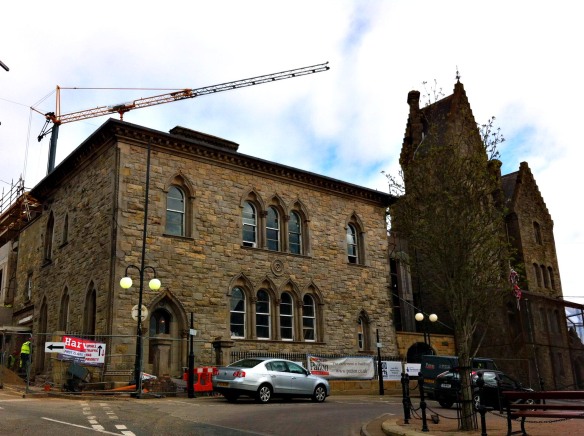 This is Ranfurly House and the old police barracks in Market Square Dungannon Co Tyrone. Work is well underway on this historic building that is being redeveloped in a major refurbishment.
The ‘Old Belfast Bank’ in Market Square, Dungannon and the landscaping of Castle Hill jointly represent an investment to provide an arts centre and interpretative display in the ‘bank’ now known as Ranfurly House. It will form part of a heritage park on the site of the Gaelic O’Neill Clan stronghold on Castle Hill.

The old police barracks in Dungannon is a fascinating building in an architectural as well as a political sense. Festooned with turrets and towers, its Scottish Baronial design dates from the beginning of the twentieth century. The result of an attempt to combine its function as a barracks with defensive features, its layout and façade are so unusual for their time that a local legend arose to explain it. Due to an error in London, the wags say, the plans for the Dungannon police barracks were sent to the Khyber Pass and the building meant for Afghanistan was erected in Dungannon.