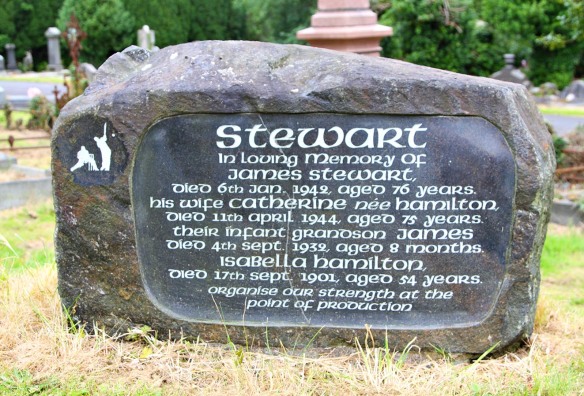 I was in Belfast today and between appointments spent a while in the City Cemetery which is bordered by the Falls and Whiterock Road. I used to spend many lunch times wandering around this historical and fascinating place. This is the grave of James Stewart who died on January 6th 1942. His people were weavers who came from the Lissue area of Lisburn who moved to Belfast in 1861 and they lived in Marine Street in the docks area were James was born on July 11th 1866. They then moved to Lincoln St off the Falls road. After marriage he and his family lived inLeopold Street off the Shankill Road until his death.  He was a life long cricket fan and was a member of Woodvale Cricket Club. He was also a socialist and his left wing politics and his love of cricket are reflected on his headstone with the batsman and wicket keeper carved on the top left hand side of the stone and the words “Organise our strength at the point of production” which is a quote from the second international. His son Charles was a republican who fought in the Irish War of Independence with the 2nd Battalion Belfast Brigade of the IRA and during the Civil War with the East Mayo Roscommon anti treaty forces. Charles was captured in the North and spent some time in Crumlin Road Jail as well as time on the prison ship The Argenta and in Derry Jail before being released in 1924. Charles Stewart is buried in Milltown Cemetery which is on the opposite side of the Falls Road from the City Cemetery.