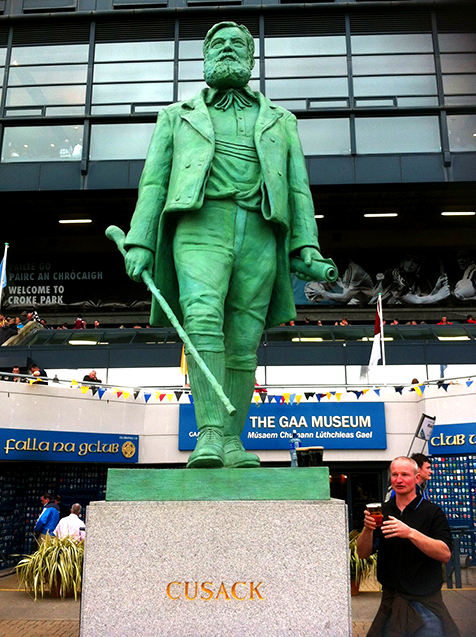 The All Ireland Hurling Finals 2012 turned out to be an historic occasion as it was the first time ever that both minor and senior games were drawn. It was the first time since 1959 that the senior game will have to be replayed. Galway and Kilkenny severed up an incredible game which was a pleasure to watch even as a neutral from Tyrone. This is the statue  created by artist Paul Ferriter of one of the founders of the GAA Michael Cusack which is at the stand named after him at Croke Park.

Michael Cusack was born to Irish speaking parents, in the parish of Carron on the eastern fringe of the Burren, County Clare, in 1847. Cusack became a national school teacher, and after teaching in various parts of Ireland became a professor in 1874 in Blackrock College, then known as the French College. In 1877, Cuasck established his own Civil Service Academy, ‘Cusack’s Academy’ in Dublin which proved successful in preparing pupils for the civil service examinations.

A romantic nationalist, Cusack was also “reputed” to have been associated with the Fenian movement. He was also a member of the Society for the Preservation of the Irish Language which was founded in 1876, and later the Gaelic League who in 1879 broke away from the Society. Also in 1879, Cusack met Pat Nally, who was a member of the Irish Republican Brotherhood and a leading nationalist and athlete. Cusack found that Nally’s views on the influence of British landlordism on Irish athletics were the same as his. Cusack would recall how both Nally and himself while walking through the Phoenix Park in Dublin seeing only a handful of people playing sports in the park so depressed them that they agreeded it was time to “make an effort to preserve the physical strength of our race.” Nally organised a National Athletics Sports meeting in County Mayo in September 1879 which was a success, with Cusack organising a similar event which was open to ‘artisans’ in Dublin the following April.