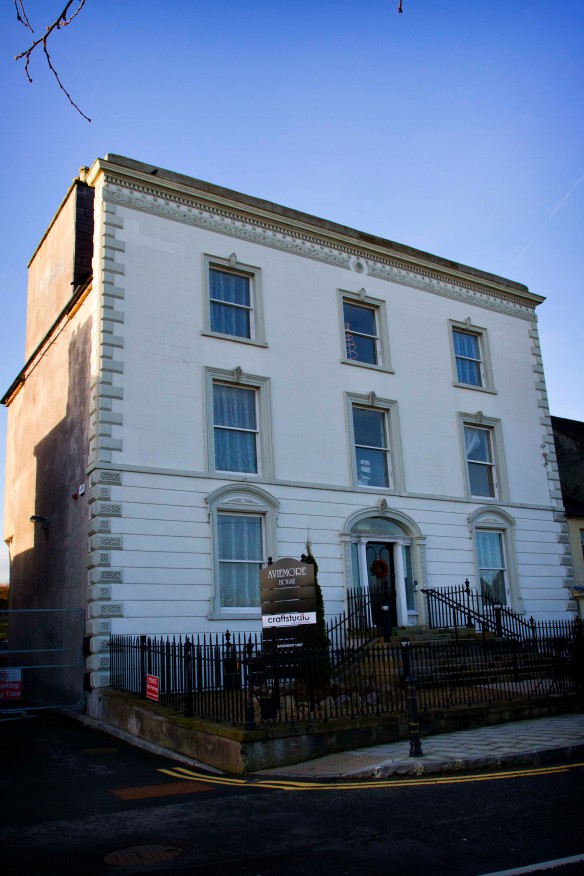 On a town centre elevated site with impressive views over much of Monaghan town, Aviemore House is a listed building dating back to 1760. This grand historical residence has been refurbished in recent years by a company called Geda who as it happens have their head office at the Moor Bridge Clonoe near Coalisland where I live.  The building boasts a unique mix of 18th century features such as the original staircase dating back to est. 1760, original sash windows and shutters.

It is believed to have been originally constructed in 1760 by Sir James Hamilton, a local member of the Grand Jury and Commanding Officer of the Monaghan Battalion of Volunteers. As the house is situated on one of the most prominent locations in Monaghan, it is not surprising that he was once such a notable member of Monaghan society, (the site was once considered for the construction of Monaghan Cathedral). High on a hill over looking the diamond, modern historians believe, on looking at the shape of the rooms, that it may have once been used for administrative purposes, such as meetings of the Grand Jury. Local legend also has it, that a secret tunnel that once ran from the Court House in Monaghan to the jail (now the hospital) was also linked to Aviemore.

It was then passed on to his son, Dacre Hamilton who went down in local folklore as a ruthless rents agent for the Rossmore estate. In 1870, the house is sold to spirit merchant, James Cinnamond for £1400. At this time, the property was believed to have been run by Cinnamond’s daughters as a private girl’s school. This is a good indication to the concentration of prosperous families in the area who could afford to educate their women.

On his death in 1933 the property is sold to Marcus Killen for £1333. Dr Killen used the smaller reception room on the ground floor of Aviemore for his Doctors surgery. His widow continued to live in the house until long after his death.